Breast Cancer: Everyone Has a Story

“Yes, that first morning after that life altering diagnosis, when we get up and put one foot in front of the other and begin our first official day as someone with breast cancer, we become Survivors…finding the strength we never knew we could summon and a fight to survive that we never imagined we’d need. Yes, that is the day we become survivors.”

I hung on every word that Colleen Curtis spoke this past Sunday at the CIBC Run for the Cure.

“Breast cancer decimates the entire family who fluctuate between moments of fear and sadness — and yet, even more moments of incredible strength, love, and compassion.”

How did she know my story? She was recounting line for line the journey I have been on with my best friend.

“I have often felt that the sense of helplessness experienced by the primary caregivers … is in some ways more difficult than that of the breast cancer patient themselves as we are forced to be actively involved in doing something, treatments, doctor’s appointments, support groups, etc, while those who care for us are left wishing they could do more or ease our struggles…”

While I was ready for CIBC’s Run for the Cure – as ready as you can be not having trained – I was not prepared for the emotions it would evoke. Following Colleen’s speech, I had the chance to hug her and thank her for sharing. She told me she was happy to participate, as this would be her last Run. The expression on my face clearly gave away my confusion. Colleen went on to explain her cancer had metastasized. It took a second to register.

The woman who had just delivered an energetic, funny, and powerful message was dying from advanced metastatic breast cancer.

I felt that same sucker punch as the day my friend Dani delivered her news.

In that moment I knew how I would write about this day. I asked Colleen if she had an extra copy of her speech and for permission to share her story. I needed to spread the message; not in my words alone, but in those of a survivor.

As I made my way to the starting line, reality set in. What the hell was I doing? I had not trained; not even once. The only exercise I’d done in the last few months was walking to the car to drive our dog to the local fairgrounds so she could run freely while I played on my phone. There was no way this would end well.

Hundreds of runners and survivors started out together. I trotted along. Surprisingly enough I didn’t feel too bad. Having the Mississauga Fire Department running in front of me provided me with a distraction – at least for the first 250 meters.

Before I knew it I was “running” by the 1KM marker. I was feeling good at this point, and there were only 4 more kilometers to go.

I found my pace bunny; he was a man dressed in black with pink shoes. I stayed close enough – yet far enough – so I wouldn’t come across as a complete stalker. We moseyed along, and I felt like a rock star as I convinced myself we missed the 2KM marker and must have been at least half way finished.

A few minutes later there it was, staring me down: a big 2KM sign and panic set in. How the hell was I supposed to do this? That’s when I started to playback the events and speeches of the morning. There were images of courage and of strength. The scars that breast cancer left on people’s hearts. Colleen’s words came flooding in:  “You’ll never walk alone.”

Finally the 4KM marker came into sight. It was as if the running fairies had sprinkled me with magic jogging powder and I was almost there. When I heard the words “only 30 more metres” my emotions took over and I crossed the finished line in tears. A few seconds later I was in my friend arms sobbing.

Within those last 30 metres I had relived the entire journey I have been on with my girlfriend through her fight with breast cancer. I relived the morning I got the text from Dani asking me to go over and I knew something was wrong. The night we celebrated the girls with a bye-bye boobies party. The longest day ever: the one when she lost both of her breasts. The text telling me she was cancer free. The tears. The laughter. The hurt. The anger. The silver linings. I relived it all.

We all get tired of clichés sometimes. When you go through an experience like breast cancer, they become part of your journey however. Colleen put it best when she said,

“But like all clubs, even the breast cancer club has its privileges, and while I certainly don’t feel that the perks outweigh the pain, I am certain that I would have never truly lived the truth behind all those clichés which I once so lightly bantered about and now truly get – carpe diem; life is fragile; laughter is the best medicine; don’t sweat the small stuff; live each day as if it was your last; dance as if no one was watching; forgive and forget; live in the moment; every cloud has a silver lining; friends are the family you chose for yourself; you can’t take it with you; there’s no time like the present; count your blessings; and of course YOLO.”

I would only add one more, and that’s the one Dani and I have lived by these last few years. It’s this: Don’t wait for the storm to pass, learn to dance in the rain.

Somehow I managed to find a few seconds of breath and shot this quick message during the run.

Click here to view the picture gallery from my run.

Thank you to the Canadian Breast Cancer Foundation for sponsoring this post on Life in Pleasantville.  There is a cure; together we can find one. 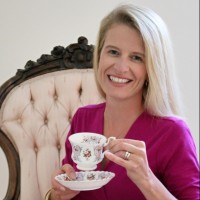 Sarah, aka MrsARob, is just a girl babbling her way through life. Like her favourite wine she is refreshing, zippy, and a little edgy. She tells stories about travel, retail therapy, life with a rescue pooch and other nonsense. What started out as just an outlet when her bestie was diagnosed with breast cancer, writing grew into a passion for Sarah. She loves connecting with people and igniting emotion. You can read more of her babble at www.itsallaboutme.ca or find her mad tweeting and gramming as @MrsARob both on Twitter and Instagram. She's got one of those Facebook pages too.